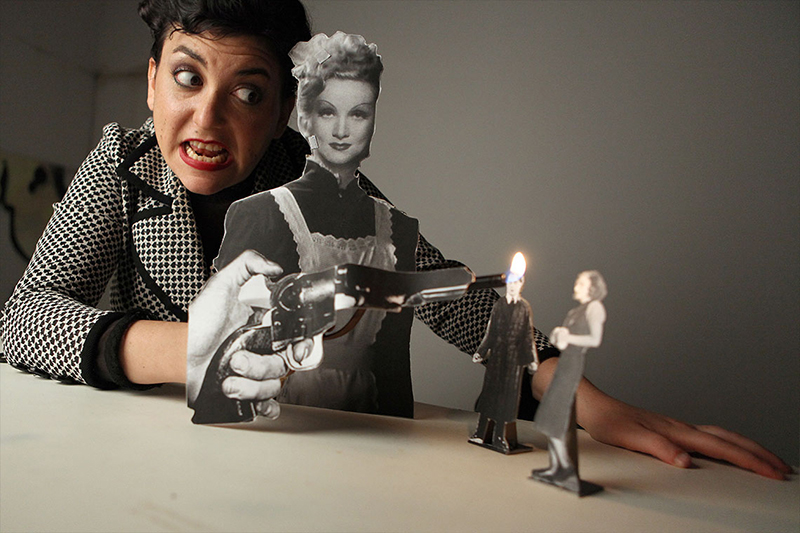 Every three years The Chicago International Puppet Theater Festival hosts local and visiting theaters from the US and all over the world. The actors of these theaters use no ordinary puppets that are usually only fit for children. Instead, the modern puppet theater integrates human acting theater with puppets, choreography, art, shadow theater, high- and low-tech puppets, and all kinds of possible – and especially, impossible mechanical, electrical, and optical contraptions. The inter-acting of the human and the mechanical creates a blended reality in which it becomes increasingly unclear – who is actually controlling whom, who is alive and who is not so much… The viewer, naturally identifying with actors and their artsy mechanically-extended partners, finds oneself drawn into a bizarre and confusing medium in which one’s own identity comes into question, and the boundary of art and life is blurred. Which has been a true goal of all real art beginning from rock paintings of the ancient artist, since the times immemorial.

In recent years puppet theater has become a major force within art and theater domain, and has made a long way from being seen as somewhat an inferior craft form targeted mostly either for children, or for unsophisticated audiences. Nowadays, different pieces attract audiences of all ages, and especially those that value an artistic view of life.

Two of the participating artists’ quotes illuminate the contemporary view on puppet theater.
Blair Thomas: “I think it’s the amalgamation of aesthetics — the organic rawness of the older techniques that are now blended with new technology in ways that maintain the quality of human grit. There is something about puppets that connect us to another world. They have a hypnotic quality that gives credence to the irrational, which is such a necessary part of the human condition. They’re not alive, but they appear to be.”
France’s Compagnie Non Nova: “…takes an ordinary object—a flimsy plastic shopping bag—and transforms it into something magical. Anthropomorphized plastic figures take flight buffeted on invisible waves as a performer manipulates them with precise, complex choreography, creating an intoxicating visual ballet out of the everyday.”

Previous puppet festivals happened in Chicago throughout the recent years and even decades, with intermissions of various lengths. The present is 3rd installment of Chicago International Puppet Theater Festival, founded by Blair Thomas & Co, who is a creator of a unique style within the puppet theater tradition, and also a co-founder of Redmoon Theater that, during its existence, integrated human acting and puppetry. The Festival has opened with a celebratory reception and performances at the magnificent Fine Arts Building on Michigan Avenue. The program opener was a family-friendly First Nations spectacle, Ajijaak on Turtle Island, that draws on Ojibwe, Lakota, and Cherokee lore. A unique cabaret performance by Israeli chanteuse, Yael Rasooly entertained guests of the reception. Many young and accomplished companies were present, from the US, Europe, and Asia, representing or echoing a great variety of well-known styles, from Japanese Bunraku to Polish Erzy Grotowski’s and everywhere in-between. The Festival continues at various Chicago venues, including Museum of Contemporary Art, Chopin Theatre, Links Hall, and quite a few others. For schedules and further details see the Festival’s web site – chicagopuppetfest.org