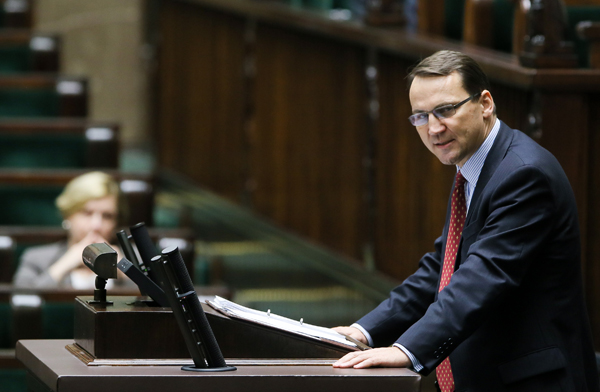 Poland and the EU did everything they could to persuade Ukraine to sign the association treaty, said Foreign Minister Radoslaw Sikorski presenting a government report Thursday. The EU offer for Ukraine still holds, so does Poland’s offer to mediate.

Poland is concerned about Ukraine’s decision not to sign the association treaty at the Vilnius summit of Eastern Partnership, but “this does not change anything in our Eastern policy.”

“Our priorities have been clear for many years and we are putting them consistently into effect. On this road there will be steps forward, but also, from time to time, a step backwards will occur. Slowly but surely we have been helping our Eastern neighbour to move closer to the EU and to Western standards and we will keep on implementing this plan,” Sikorski declared.

“We cannot sign the agreement (with the EU) on behalf of Ukraine and we cannot implement reforms in Ukraine in lieu” of its authorities, he went on. “Reforms and decisions are in the hands of Ukraine and Ukrainian authorities.” “We believe that the European choice for Ukraine is still possible and a not-too- distant prospect.”

Sikorski opined that the situation in Ukraine was “very tense.” “A large segment of Ukrainians do not agree with the (negative) decision made by president Yanukovych (…).” The authorities had not expected such a strong pro-EU determination on the part of society, he added.

Head of the Sejm Foreign Affairs Committee Grzegorz Schetyna (PO) urged the Poles and political parties to speak with one voice on Ukraine. He likened the ongoing pro-EU demonstrations in Kiev to the situation in Poland in 1988, one year before the momentous round table talks that led to a compromise between the ruling communist party and the democratic opposition. “Let the Ukrainian road be the same as our road was back in 1988. In Ukraine a highly determined civil society is being born. Hundreds of thousand people now say ‘no’ to corruption and violence in public life,” Schetyna noted.

The Law and Justice (PiS) Sejm caucus motioned for a rejection of the Sikorski report on the Vilnius summit and Polish policy on Ukraine. The summit and its aftermath were strategic defeats for the EU and for Poland, argued Krzysztof Szczerski (PiS).

“This is not to say that everything has been lost. We know that the game is still on, but without admitting we were defeated in the first round we cannot prepare next moves well,” he claimed.

“(…) we support all actions that help integrate Ukraine with the EU and all measures taken by Polish authorities with a view to maintain dialogue with both Ukrainian authorities and the opposition,” said SLD leader Leszek Miller. He blamed the EU for failing to prepare a financial offer for Ukraine – not a grant from the EU budget, but a contribution to investment and other joint projects beneficial for both sides.

The government and the EU were caught flat-footed when Ukraine refused to sign the association treaty in Vilnius, said Twoj Ruch (Your Movement) MP Witold Klepacz. The PO-PSL cabinet lost direction and demonstrated utter helplessness, he charged.

The government should have had several crisis scenarios at the ready that would take into account a ‘no’ from Yanukovych, he thundered. “We clearly see that such professional approach was lacking, there was no plan and now it hard to say what to do next,” he concluded. All actions by Poland and the EU were late. Now support should be given to both Ukrainian opposition and president Yanukovych who is at a loss what to do, the TR MP declared.