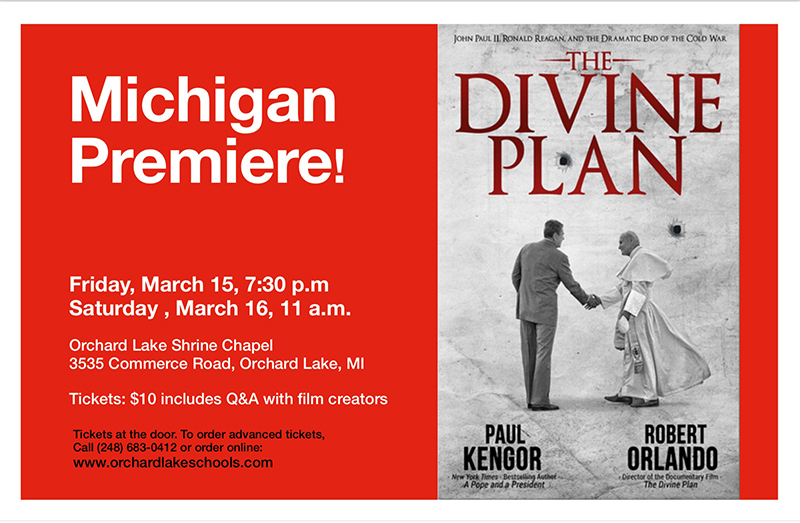 “The Divine Plan: Reagan, John Paul II and the Dramatic End of the Cold War’’ will have its Michigan debut March 15-16 at the Orchard Lake Shrine Chapel where the saint celebrated Masses during visits in the 1960s and 1960s.

The new documentary by nationally known historian Paul Kengor and filmmaker Robert Orlando reveals little known details of the partnership of St. John Paul II and President Ronald Reagan that began after both were shot and survived in early 1981, culminating in the collapse of the Soviet Union and Eastern Bloc communism over the following decade. A special question and answer session with Kengor and Orlando follows each screening.

“I wanted to bring history alive, not just to people who have some familiarity with the subject, but also to younger audiences,” Orlando said.

The dramatic and true story reveals how the first Polish pope and the American president each believed they were saved from assassination March and April 1981 attempts for a special purpose and together worked to overwhelm an Evil Empire and break the Iron Curtain that divided Europe for 40 years. More surprising: The Cold War ended without any violence.

“It is fitting that this story of this great story of the first Polish-American miracle be told here, at the Archdiocesan Shrine that houses St. John Paul’s relics and the icon he gave Orchard Lake Schools 50 years ago,’’ said the Very Rev. Can. Mirosław K. Król, Chancellor, Orchard Lake Schools, which includes a Polish Seminary, St. Mary’s Prep and the Polish Mission. 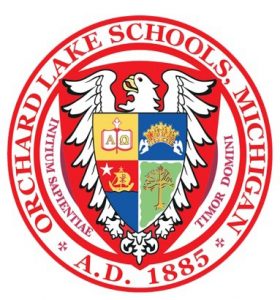 When: The Michigan Debut of the film is Friday, March 15 at 7:30 p.m. and a second showing will be Saturday, March 16 in the Orchard Lake Shrine Chapel.

Where: The chapel is at the center of the Orchard Lake Schools campus. The address is 3535 Commerce Road, Orchard Lake, Michigan.

Reserve tickets (just a $10 donation) by calling (248) 683-0412, visiting our website at www.orchardlakeschools.com or at the door prior to each performance.

Learn more about the film: thedivineplanmovie.com.