URBANA, Ill. – Chicago’s largest university will be home to the city’s first public law school under an agreement approved Thursday that will make the John Marshall Law School part of the University of Illinois at Chicago (UIC). 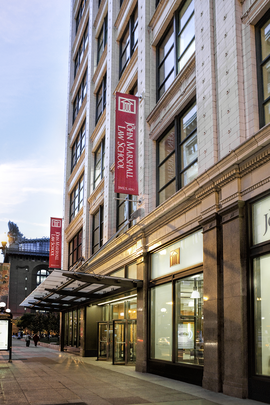 The new UIC John Marshall Law School will welcome its first class in the fall of 2019, under a plan approved Thursday by the University of Illinois Board of Trustees and the board of directors of the private law school, established in 1899 and named for the fourth chief justice of the U.S. Supreme Court.

Over the next year, the two institutions will work together to transfer the law school’s assets to UIC, including its roughly 50 faculty and the four buildings in Chicago’s south Loop. The existing campus will continue as the law school’s home after it becomes UIC’s sixteenth academic college.

The acquisition is also subject to approval by the Illinois Board of Higher Education and accreditation from the Higher Learning Commission and the American Bar Association.

The agreement follows about 16 months of talks to take advantage of the natural alignment between UIC’s public mission and the law school’s commitment to serve students from underserved communities and bridge the justice gap for citizens of Chicago, officials said.

UIC, which saw enrollment grow to a record 30,000-plus students last fall, is one of the nation’s most ethnically and culturally diverse universities. It is also home to a host of academic, research and community service programs that target improving the quality of life in Chicago and beyond.

“This historic merger is yet another sign of UIC’s continuing rise as a powerhouse in public higher education, and reflects its bedrock commitment to the needs of this dynamic, global city,” said University of Illinois System President Tim Killeen. “I am deeply grateful to the leadership of both institutions for coming together to serve students, justice and progress.”

Chicago is currently one of few major U.S. cities without a public law school, and UIC is in the minority of research universities rated in the Carnegie Foundation’s top tier with no law school.

University and law school officials said the move will enhance access and affordability, and create a wealth of new opportunities for students through joint-degree and dual degree programs that could be established across UIC’s many graduate schools. Students also could explore classes outside of law school on a UIC campus that is only about 10 minutes away from John Marshall.

The law school currently enrolls about 1,000 students in three degree programs. Officials expect tuition will continue to support operations at UIC, so the merger will require no new state appropriations or funding from UIC or the U of I System.

Merging John Marshall Law School into UIC was reviewed by 11 joint committees and was the subject of several public town hall meetings at both institutions, earning positive and nearly unanimous support. The merger also was endorsed by the University Senates Conference, an advisory committee for the president that represents the faculty of all three universities.

The board approved the appointment of veteran administrator Avijit Ghosh as the U of I System’s vice president and chief financial officer. He has served in a designate capacity since June 1.

Ghosh joined the U of I in 2001 as dean of the College of Business and a professor of business administration in Urbana-Champaign. He also has served as vice president for technology and economic development, as senior advisor to then-President Robert Easter, and as chief executive officer of the University of Illinois Hospital. Before joining the U of I System, he spent more than 20 years as a professor and administrator at New York University’s Stern School of Business.

He earned his bachelor’s degree from Calcutta University, a post-graduate diploma in business management from Xavier Institute and his master’s and doctoral degrees from the University of Iowa. He succeeds Walter K. Knorr, who retired in August after more than a decade as vice president and chief financial officer.

The board also approved the appointment of Tasha Pointer as head women’s basketball coach at UIC. She has served in a designate capacity since she was named in April to succeed Regina Miller, who was dismissed after compiling a 95-122 record in seven seasons.

Pointer was an assistant coach last year at Northwestern University, and earlier served as an assistant at Columbia, Xavier, St. John’s and Rutgers, where she helped lead the Scarlett Knights to their first Final Four as a player in 2000.

She earned her bachelor’s and master’s degrees from Rutgers after graduating from Whitney Young High School in Chicago, where she was a Parade All-American.

The University of Illinois System is a world leader in research and discovery, and the largest educational institution in the state with more than 83,000 students, nearly 25,000 faculty and staff, and universities in Urbana-Champaign, Chicago and Springfield. The U of I System awards more than 22,000 undergraduate, graduate and professional degrees annually.